Usain Bolt of Jamaica poses on the lap of honour

Usain Bolt said he was moved to the brink of tears as he lapped up the applause from the London Stadium crowd on Sunday evening.

The majority stayed behind following the final event of the Championships to mark the retirement of an athletics great as he bowed out with a lap of honour.

Bolt was presented with a section of the track from London 2012, the Olympics at which he declared himself a “living legend” by defending his 100 and 200 metres titles, by athletics chief Lord Coe and Mayor of London Sadiq Khan. 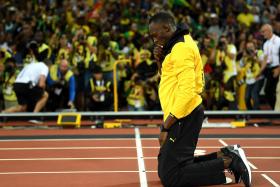 “These are my two events that I have dominated for years. I was saying goodbye to everything. I almost cried. It was close, but it didn’t come.

“It’s really sad that I have to walk away now.”

Bolt arrived at the World Athletics Championships in London hoping to defend an unbeaten record in major global finals, but was pipped to the post by American duo Justin Gatlin and Christian Coleman in the 100 metres before pulling up injured in the 4x100m on Saturday.

“For me I don’t think one championship is going to change what I’ve done,” said Bolt, who did, though, admit he needed a drink after a “rough” week.

“I remember after losing the 100m someone said to me, ‘Usain, no worries, Muhammad Ali lost his last fight also, so don’t be stressed about that’.

“I’ve proven myself year in, year out, throughout my whole career.”