A destroyed mobile home park is pictured in an aerial photo in the Keys in Marathon, Florida, Sept. 13, 2017.

President Donald Trump plans a visit Thursday to hurricane-ravaged Florida, where recovery is slow but steady.

Trump plans to stop in Naples, on Florida’s west coast, which was directly in the path of Hurricane Irma.

He has already declared the state a major disaster area, a move that speeds up the release of federal relief funds.

Officials say restoring power is their top priority. As of late Wednesday afternoon, about 33 percent of Floridians still had no electricity, down from the more than 60 percent who had been left without power just after the storm passed earlier this week. It could be as long as a month for power to be fully restored across the state. 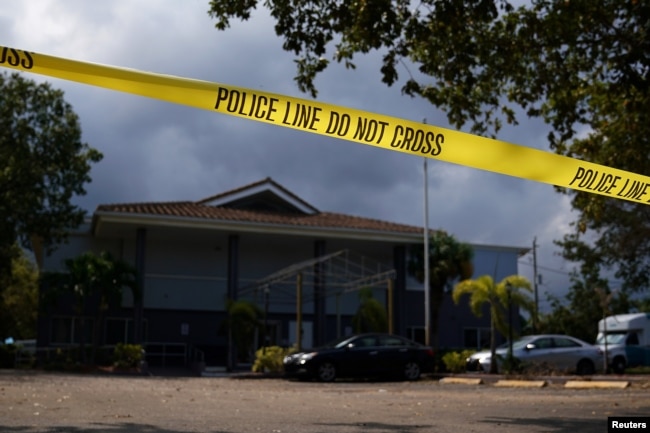 Officials were investigating whether a lack of electricity to run air conditioning was to blame for the deaths of eight nursing home patients in Hollywood, Florida.

The deaths were discovered early Wednesday when a hospital across the street from the nursing home began receiving elderly patients suffering from heat exhaustion, which led to all 115 people in the home being evacuated.

The retirement home had apparently been without electricity since the storm struck. It is unclear why generators failed to keep the building cool.

Scott ordered authorities to check on nursing facilities across Florida.

In the Florida Keys, the hardest-hit part of the state, hundreds of people lined up in a shopping center parking lot Wednesday, grateful for the food and water being handed out by soldiers and the National Guard. Soldiers of the 602nd Area Medical Support Company walk out to their C-17 transport plane on Pope Army Airfield as they are deployed to St. Thomas in the U.S. Virgin Islands to aid in the aftermath of Hurricane Irma, at Fort Bragg, N.C., Sept. 13, 2017.

Guard members were also working to clear roads and carry out search-and-rescue missions across the Keys. Only a handful of homes and buildings in the Keys were spared from damage from Irma. It will be some time before many residents are allowed back in to see what is left of their property.

Elsewhere, France and Britain were promising to boost aid to those hit by the storms in their territories in the Caribbean.

French President Emmanuel Macron visited St. Martin and St. Barthelemy on Wednesday after stopping on Guadeloupe. Macron, who has acknowledged the angry responses among some residents to what they saw as inadequate help from France, promised more supplies and security forces for the islands.

British Foreign Secretary Boris Johnson toured Anguilla and the British Virgin Islands on Wednesday. Irma was a Category 5 storm when it clobbered the islands last week. Johnson said more security forces and “huge quantities of supplies” were coming, and that he expected Prime Minister Theresa May to announce further aid. 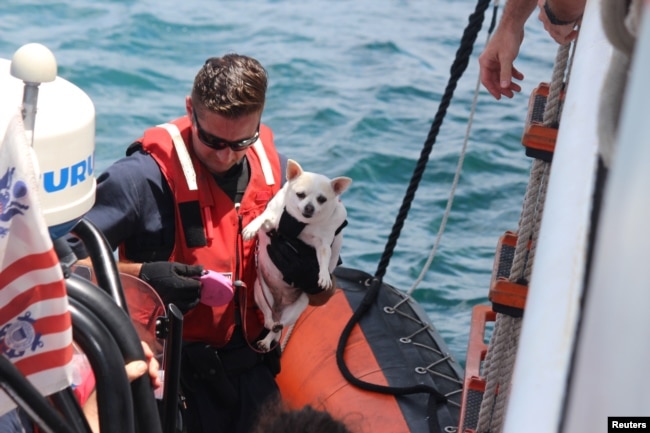 A crew member aboard the Coast Guard cutter Valiant brings a dog aboard after evacuating more than 95 people and pets from St. Thomas as part of Hurricane Irma response and relief efforts in St. Thomas, U.S. Virgin Islands, Sept. 12, 2017.

The United Nations was airlifting food and other vital relief to the islands of Antigua, St. Martin, and the Turks and Caicos.

The hurricane killed at least 37 people in the Caribbean and devastated the islands, including Barbuda, which has evacuated all of its citizens to Antigua.

Meanwhile, some of the biggest stars in show business took part in a benefit concert Tuesday that raised more than $44 million for the victims of Hurricanes Irma and Harvey.

It is going to cost tens of billions of dollars to replace homes and repair infrastructure destroyed by the two storms. Harvey slammed into the southwestern state of Texas last month as a Category 4, flooding much of the Houston area.