The BJP and the main opposition Congress party battled it out with powerful regional rivals in a bruising campaign over seven phases of polling.

Results will be announced on 23 May. Analysts warn exit polls have often been wrong in the past.

Many saw the election as a referendum on Mr Modi who won a landslide in 2014.

A party or coalition needs 272 seats in parliament to form a government.

What are the exit polls saying?

Four exit polls saw big wins for the BJP-led National Democratic Alliance (NDA), predicting that it would win anywhere between 280 and 315 seats, far more than the Congress party.

However, a Nielsen-ABP news channel poll suggested that the BJP alliance would win 267 seats, falling short of a majority.

This prediction comes despite its projection that the party would lose heavily in the bellwether state of Uttar Pradesh, which sends 80 MPs to parliament, more than any other.

In 2014 the BJP won 71 of the state’s seats, and the poll suggests it will lose as many as 51 of those seats to powerful regional parties.

What has the reaction been?

The BJP tweeted out a telling cartoon, picturing Mr Modi mowing down his political opponents, with an onlooker observing that the situation is the result of seven phases of polling. 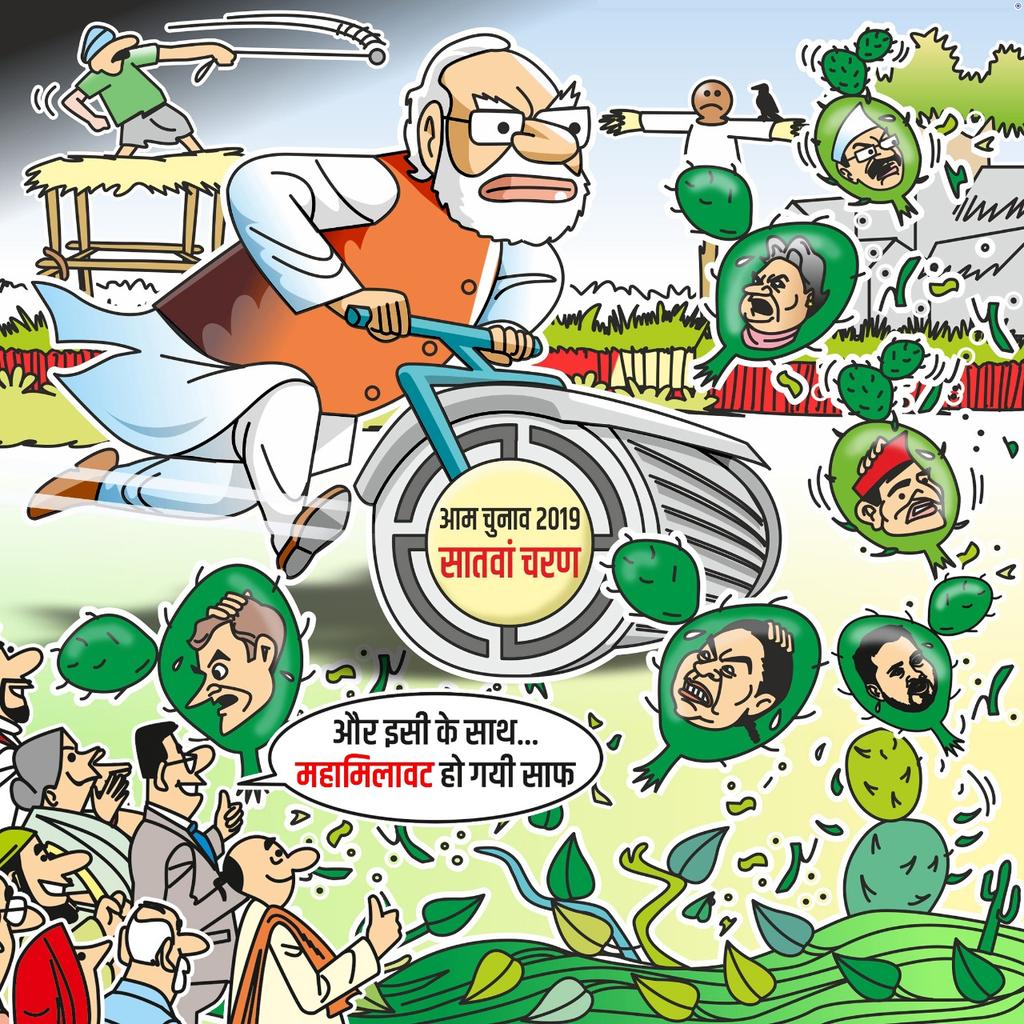 “The game plan it to manipulate or replace thousands of EVMs [electronic voting Machines] through this gossip. I appeal to all opposition parties to be united, strong and bold. We will fight this battle together,” she added.

Also on Twitter, Congress party leader Rahul Gandhi lashed out at the election commission, suggesting that they had been compromised.

From Electoral Bonds & EVMs to manipulating the election schedule, NaMo TV, “Modi’s Army” & now the drama in Kedarnath; the Election Commission’s capitulation before Mr Modi & his gang is obvious to all Indians.

The EC used to be feared & respected. Not anymore.

19.1K people are talking about this
Report

The election began on 11 April and was held in seven phases for security and logistical reasons. With 900 million eligible voters, it is the world’s biggest exercise in democracy.

As voting ended, there was a flurry of meetings by opposition leaders, sparking speculation.

What were the key issues this election?

With farming in crisis, unemployment on the rise and growing fears that India is heading for a recession, he economy is perhaps the biggest issue.

Under Mr Modi, the world’s sixth-largest economy has lost some of its momentum. Growth hovers around 7% and a leaked government report claims the unemployment rate is the highest it has been since the 1970s.

A crop glut and declining commodity prices have led to stagnant farm incomes, leaving many farmers saddled with debt.

Many also see this election as a battle for India’s identity and the state of its minorities.

A strident – and at times violent – Hindu nationalism has become mainstream in the past five years, with increased attacks against minorities, including the lynchings of dozens of Muslims accused of smuggling cows.

And national security is in the spotlight after a suicide attack by a Pakistan-based militant group killed at least 40 paramilitary police in Indian-administered Kashmir in February.

India then launched unprecedented air strikes in Pakistan, prompting Pakistan to respond in kind and bringing the two countries to the brink of war.