A French climber known as “Spiderman” has scaled a Hong Kong skyscraper and put up a banner urging peace in the city rocked by political unrest.

Alain Robert unfurled a banner showing a handshake and the flags of Hong Kong and China on Friday morning.

Hong Kong has seen months of anti-government protests that have sometimes led to violent clashes with police.

The 57-year-old, known for climbing tall buildings worldwide, said his stunt was an “urgent appeal for peace”.

“Perhaps what I do can lower the temperature and maybe raise a smile. That’s my hope anyway,” Mr Robert said in a media statement.

As in many of his previous climbs, Mr Roberts did not use ropes or a harness.

Mr Robert said his message at the 68-storey Cheung Kong Center was “an urgent appeal for peace and consultation between Hong Kong people and their government”.

Australia-based Chinese dissident artist Badiucao asked on Twitter: “Do you really want (to) shake hands with butchers and dictators?”

This flag shows how ignorant and stupid for some westerns understanding of Hong Kong and China.
stop normalising Beijing ok? Do u really want shake hands with butchers and dictators. 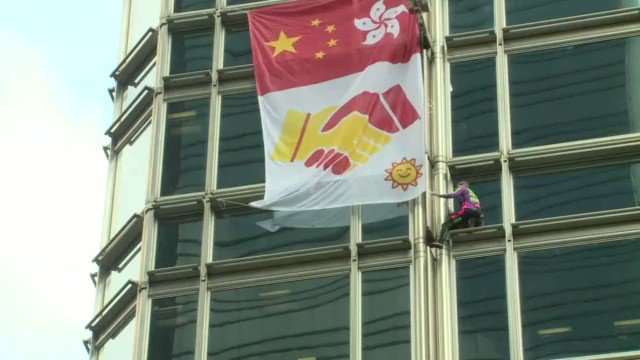 180 people are talking about this
Report

Mr Robert usually does his stunts without prior notice or permission.

He has also climbed buildings in Hong Kong on several previous occasions, including the Cheung Kong Center.

Last August he was banned by a city court from attempting any more climbs in Hong Kong for 365 days, but it is unclear if the ban has now expired.

Earlier this year, he was arrested in the Philippines after climbing a 47-storey tower in the capital, Manila.

His past feats including climbing the Burj Khalifa tower in Dubai, the world’s tallest building, as well as the Petronas Towers in Kuala Lumpur, the Taipei 101 building in Taiwan, and the Heron building in London.

The Hong Kong protests started in April over plans for an extradition bill that would have allowed criminal suspects to be handed over to mainland China.

Critics warned that the bill could undermine the city’s legal freedoms and might be used to silence dissidents.

The demonstrations have since taken on a much wider scope, with protesters now demanding full democratic rights for the Hong Kong’s citizens and an independent inquiry into the police response to the protests.

The Cheung Kong Center climbed by the French spiderman is owned by the city’s richest person, billionaire Li Ka Shing.

Mr Li on Friday put out a number of ads in Hong Kong newspapers, urging an end to the past weeks’ violence.

He called on people to “love China, love Hong Kong and love yourself” and to “cease the anger with love” and “stop the violence”.

Coinciding with the ads, the businessman issued a statement saying he believed Hong Kong’s prosperity was tied to the principle of “one country, two systems”. The former British colony has different rights and a judiciary independent from the mainland.

He also said he thought the government had heard the messages from protesters “loud and clear”.