Mr Johnson paid tribute to the DRC authorities and the Congolese Institute for Nature Conservation for their “tireless help”.

The Britons are receiving “support and medical attention”, according to a statement by Virunga National Park.

A park ranger killed by the kidnappers has been named as Rachel Masika Baraka.

The group’s driver was injured and released shortly after the abduction, which took place near the village of Kibati, just north of Goma, on the morning of 11 May.

Earlier, tributes were paid to 25-year-old Ms Baraka, the eighth ranger to be murdered at the park this year.

Mr Johnson said his thoughts were with Ms Baraka’s family, the injured driver, “and the released British nationals as they recover from this traumatic incident”.

Park director Emmanuel de Merode said: “Ranger Baraka’s life was tragically cut short in service to Virunga National Park. She was one of the park’s 26 female rangers and was highly committed, showing true bravery in her work.

“We wish to extend our sincerest condolences to her family, and our thoughts are with all those affected by this incident.” 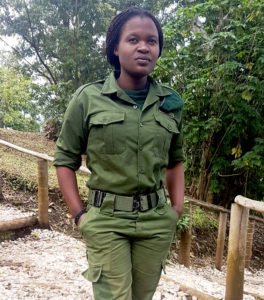 25 year old Ranger, Rachel Masika Baraka, died in Friday’s ambush in Virunga National Park. She was protecting 2 British tourists + a Congolese driver – all released and safe. Rachel is the 8th ranger to be killed by gunmen in the park this year.

The British ambassador to the DRC, John Murton, praised the “courage and commitment” of the park authorities and the Congolese Institute for Nature Conservation in securing the safe release of the hostages.

“The bravery and determination of all the staff of Virunga is vital for the conservation of animals in the park, and the protection of local communities,” he said.

Congolese authorities are working with the Foreign Office to repatriate the British tourists, according to a park statement.

Cosma Wilungula, director general of the Congolese Institute for Nature Conservation, said: “We would like to thank our brave team for ensuring the swift resolution of this incident, and the safe return of the two British nationals.”

The BBC’s Louise Dewast, reporting from the country’s capital Kinshasa, said there were armed groups operating in the park and there had been kidnappings before, with half involving a ransom demand.

In April, Mr de Merode, told the BBC World Service that recent attacks were part of “a bigger picture which involves the trafficking of natural resources”.

He said the park was protected by around 800 rangers but there were also estimated to be between 1,500 and 2,000 militia members in and around the park.

Last month five young rangers and a driver were killed in a militia ambush, the park said.

It was the deadliest attack in recent years and took the total number of rangers killed in the last 20 years to 175.

A fifth of the park’s southern sector was also deforested due to illegal charcoal production last year, the park said.

It is a Unesco world heritage site and home to critically-endangered mountain gorillas, as well as lions, elephants and hippos.

BBC Africa editor Will Ross said poachers were active in the park, which was also under threat due to the illegal felling of trees to make charcoal and plans for oil exploration.

The Foreign and Commonwealth Office advises against all but essential travel to Goma and has urged Britons not to go beyond the city.

The advice, last updated four days ago, says tourists are vulnerable if travelling without escorted transport in the eastern part of the country, and the “risk of kidnap or injury as a result of armed or criminal activity remains high”.

It said that UK government staff were not always in the area and the British embassy’s ability to offer consular assistance could be “severely limited”.