The United States is offering a reward of up to $1m (£750,000) for information about one of the sons of the late al-Qaeda leader Osama Bin Laden.

Hamza Bin Laden is emerging as a key leader of the Islamist militant group, US officials say.

He is thought to be based near the Afghan-Pakistani border.

In recent years, he has released audio and video messages calling on followers to attack the US and its Western allies in revenge for his father’s killing.

In 2011, US special forces killed Osama Bin Laden in a compound in Abbottabad, Pakistan. He approved the attacks on the US on 11 September 2001, in which nearly 3,000 people were killed.

What is known about him?

Hamza Bin Laden, who is believed to be about 30 years old, was officially designated by the US as a global terrorist two years ago.

The state department says he married the daughter of Mohammed Atta, who hijacked one of the four commercial aircraft used in the 2001 attacks, and crashed it into one of the World Trade Center towers in New York.

Letters from Osama Bin Laden seized from his compound indicated that he had been grooming Hamza, thought to be his favourite son, to replace him as leader of al-Qaeda. 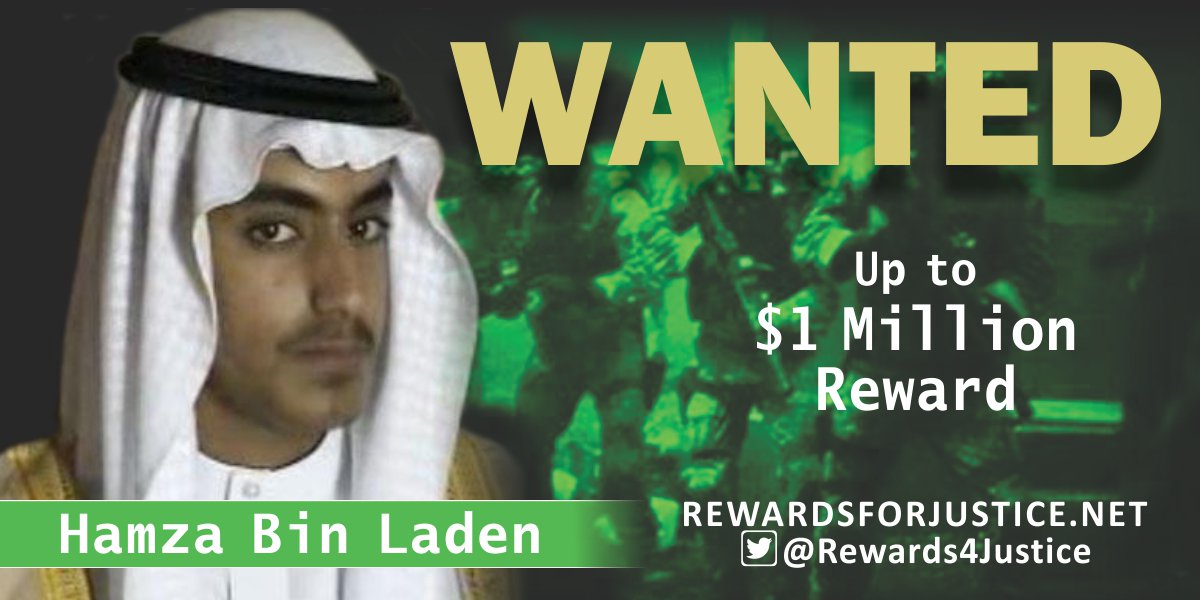 WANTED. Up to $1 million for information on Hamza bin Laden, an emerging al-Qa’ida leader. Hamza is son of Usama bin Laden and has threatened attacks against the United States and allies. Relocation possible. Submit a tip, get paid. http://www.rewardsforjustice.net  #RFJ

Hamza Bin Laden is believed to have spent years with his mother in Iran, where it is thought his wedding took place, while other reports suggest he may have lived in Pakistan, Afghanistan or Syria.

“We do believe he’s probably in the Afghan-Pakistan border [sic] and… he’ll cross into Iran. But he could be anywhere though in… south central Asia,” said Assistant Secretary for Diplomatic Security Michael Evanoff.

What has happened to al-Qaeda?

The US-led war in Afghanistan following the 2001 attack toppled the Taliban regime which had given Osama Bin Laden and his group sanctuary.

In recent years, al-Qaeda was eclipsed by the Islamic State (IS) group which attracted global attention, fighters and funds, and carried out a number of attacks on Western targets and allies.

“Al-Qaeda during this period has been relatively quiet, but that is a strategic pause, not a surrender,” said US Co-ordinator for Counter-terrorism Nathan Sales.

“Today’s al-Qaeda is not stagnant. It’s rebuilding and it continues to threaten the United States and its allies…. Make no mistake, al-Qaeda retains both the capability and the intent to hit us.”