Home News A Catholic church hosted Louis Farrakhan for an anti-Facebook speech. At least one Jewish group was not happy about it

A Catholic church hosted Louis Farrakhan for an anti-Facebook speech. At least one Jewish group was not happy about it

One week after Facebook banned Minister Louis Farrakhan and others for promoting “violence and hate,” the Nation of Islam leader made anti-Semitic remarks in a Catholic church while insisting that he is not a hateful person.

Farrakhan told those at Saint Sabina Catholic Church in Chicago on Thursday that he is “a hated man today.”
“Saturday, God willing, I’ll be 86 years old. I have never been arrested, no drunken driving,” he said. “What have I done that you would hate me like that?”
Pointing to his mouth, Farrakhan said: “It’s this that they fear. I don’t have no army. I just know the truth. And I’m here to separate the good Jews from the Satanic Jews.”
The Nation of Islam billed Farrakhan’s speech as a response to the “public outrage over the unprecedented and unwarranted lifetime ban.”
But St. Sabina’s invitation to Farrakhan drew sharp rebuke from the Illinois Holocaust Museum. The organization criticized the church, saying the speech would provide a “platform for bigotry.” 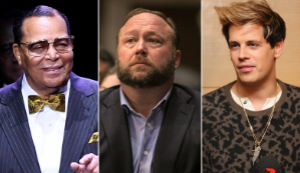 Louis Farrakhan, Alex Jones and other ‘dangerous’ voices banned by Facebook and Instagram
Facebook owns Instagram and its ban applies to both social media platforms.
Saint Sabina live-streamed Farrakhan’s speech on its website and Facebook page, despite the ban on the controversial leader.
Farrakhan said he used the social media platform “with respect.” “I never allow those who follow me to become vile as those who speak evil of us,” he said.
Farrakhan denied being misogynistic and homophobic. He said, “The white people who think I’m a hater,” don’t know him.
“No one that is with me has ever committed a crime against the Jewish people, black people, white people, no matter what your color is.”
But Farrakhan made several anti-Semitic statements during his speech, accusing Judaism of promoting pedophilia and saying that Jews do not like him because he “exposes their hatred of Jesus.”
On Friday, Jonathan Greenblatt, CEO of the Anti-Defamation League said that he was “deeply disappointing that he was given a platform in a church to spew his hateful vitriol.”
“It’s typical that even in defending himself against claims of anti-Semitism, Louis Farrakhan has once again invoked more anti-Jewish hatred. His remarks last night were vintage Farrakhan: A litany of tropes about how ‘Satanic Jews’ are corrupting society with immoral acts and that Jewish writings, ‘promote pedophilia.'”

Before the speech, Ishmael Muhammad, an aide to Farrakhan said: “This unjust sanction deprives the American public and others of the basic right to know.
“It is an abridgement of free speech in a country that presents itself as a democracy and does no public good,” he said.
The Rev. Michael Pfleger, pastor of Saint Sabina, said he has known and worked with Farrakhan for 30 years and has denounced Facebook for banning the controversial leader.
“This is a free-speech issue,” Pfleger told CNN. “I don’t agree with everything Minister Farrakhan has said. I don’t agree with anyone on everything, but we are in a dangerous time when we can no longer have dialogue without demonizing one another.”
Before the address, Pfleger said: Farrakhan “has been a bold voice against injustice done against black people in this country and his voice deserves and needs to be heard.”

Some groups are pushing back on Farrakhan’s appearance

But one local Jewish-led organization is blasting Saint Sabina for hosting Farrakhan, who has a long history of anti-Semitic statements.
“The Holocaust started with hatred and prejudice,” said Fritzie Fritzshall, an Auschwitz survivor and president of the Illinois Holocaust Museum in Skokie, Illinois. The museum is holding a press conference Thursday to protest Saint Sabina’s decision to host Farrakhan.
“When community leaders like Father Pfleger provide a platform for bigotry and anti-Semitism, it increases the threat against all of humanity,” Fritzshall said.
Phil Andrew, the Archdiocese of Chicago’s director of violence prevention, was expected to be among those at the Illinois Holocaust Museum denouncing Saint Sabina for hosting Farrakhan, according to a museum spokesman. 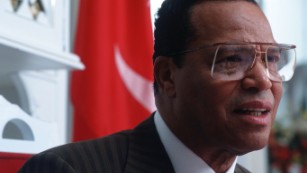 Louis Farrakhan Fast Facts
In a statement, the Archdiocese of Chicago that its leader, Cardinal Blase Cupich, was not consulted before Pfleger announced the event with Farrakhan and that the archdiocese is “not sponsoring” the speech.
The Anti-Defamation League said they will be monitoring Farrakhan’s speech. The watchdog group has called Farrakhan, who has led the Nation of Islam since 1977, “quite possibly America’s most popular anti-Semite.”
“Farrakhan has alleged that the Jewish people were responsible for the slave trade and that they conspire to control the government, the media and Hollywood, as well as various black individuals and organizations,” the ADL says.

The minister has long been a controversial figure

The Southern Poverty Law Center lists Farrakhan and his Nation of Islam as a “hate group,” saying that the “deeply racist, antisemitic and anti-gay rhetoric of its leaders, including top minister Louis Farrakhan, have earned the NOI a prominent position in the ranks of organized hate.”
In a speech in Chicago in 2018, Farrakhan said, “the powerful Jews are my enemy. “White folks are going down. And Satan is going down. And Farrakhan, by God’s grace, has pulled the cover off of that Satanic Jew and I’m here to say your time is up, your world is through.”
Pfleger, who has long worked with African-American leaders in Chicago, said Farrakhan and the Nation of Islam are respected locally for their anti-violence and anti-drug campaigns.
“Nobody has done more in the saving of young black men’s lives and turning around lives than the Nation of Islam. His respect in the African-American community has been consistent.”
But Pfleger said emails and phone calls have poured in this week criticizing him for hosting Farrakhan and threatening to withdraw donations to the church and its programs.
“If you would have heard and seen the stuff sent and spoken to me over this last week,” he said. “I was shocked — and I have gotten a lot of hate in my life. People have told me that they will destroy me.”
Correction: This article has been updated to correct the spelling of The Rev. Michael Pfleger’s name.
CNN
Share 0
Tweet
Share
Share
Share